I’m finally getting around to putting down some of my thoughts about the 2009 Southeast Horn Workshop, which I hosted at WCU March 6-8. When I first took the job at Western Carolina University in the Fall of ’06, my predecessor (Alan Mattingly) told me that he was scheduled to host the workshop in ’09, and that I was welcome to take it over, since he was moving outside the region to the University of Nebraska. I was excited by the idea, and jumped at the opportunity. So, in some ways, this workshop was 2 and a half years in the making! I can say now that I didn’t really know what I was getting into!
By January ’08, I was really getting serious about the planning, because I wanted to be able to announce the dates and guest artists at the ’08 SEHW in Columbus, GA in February. For over a year, hardly a day went by that I didn’t take some steps toward putting this thing together. I didn’t have a graduate assistant in the horn studio, so almost every detail of the planning was up to me. On top of all the work that was going into the SEHW, my wife and I decided to build a house (we move in May!), and I had to deal with the aftermath of a car accident on September 1st, ’08. It wasn’t my fault, and I still haven’t settled with the other party’s insurance. Both of these major life events have meant tons of phone calls, faxes, meetings, physical therapy, and stress! I don’t recommend mixing either of these things with trying to plan a workshop!!

As the event got closer, I did get some excellent help from some of my students, who sorted through the registrations and assigned competition times, helped coordinate the T-shirt orders, and made signs for the building and the road pointing people in the right direction. During the workshop weekend, my students, and my Phi Mu Alpha brothers, were AWESOME!! They took care of anything that anybody needed, and did it with a terrific attitude. I can’t thank them enough for their work!

Also, my parents deserve a special mention, because they came up from Florida, and stayed the entire week. They worked extremely hard, and also took care of Tyler, allowing Julie to come to some of the events of the workshop. I’ve known for a long time that I am incredibly blessed with awesome, loving parents, and they proved it again. Thanks Mom and Dad!

Now, about the weekend itself… It exceeded my expectations! We ended up with over 300 registrants, which is a SEHW record! All my advance planning paid off in that once things got started, the workshop pretty much ran itself. One of the best parts of the weekend was getting to see a lot of old friends again, and getting to make some new ones. The horn world really is a small one. It pays to be nice to everyone, b/c you will see them again!

Another nice thing about being the host, is getting to spend some more time with the guest artists. I’ve known Jeff Nelsen for a few years, but this was the first time I’d met Roger Kaza and his wife, Patti Wolf. Besides being world-class musicians, all three of them are super nice, and fun to hang out with! Julie and I met them for some North Carolina barbecue at the Dillsboro Smokehouse Thursday night when they arrived. Roger and Patti warned me that this was risky, taking a couple Texans out for barbecue! In the end, I think the NC ‘cue won their approval. Or maybe they were just being polite?

One of the downsides to being the host is that I couldn’t attend everything I wanted to, because I was running around taking care of things. Some of the highlights of the weekend for me were (in chronological order):

1) Roger Kaza’s recital Friday night. Wow! What GREAT playing (Patti too)! As one of my colleagues said: “Roger may be the best horn player in the world and nobody knows it.” It’s true that he’s kinda under the radar as far as horn soloists go, but his playing is superb. 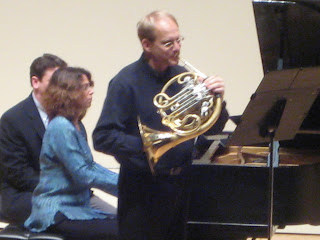 2) The military horn players’ recital Saturday afternoon. Most of these guys are great friends of mine, and I was thrilled that they were able to come be a part of the SEHW. They all sounded awesome, and they ended the program with “Fire in the Hole” for 5 horns. This was just a really pleasant program, with great playing, good variety, an exciting finish, and…the whole thing was under an hour, which was appreciated at that point in the weekend! 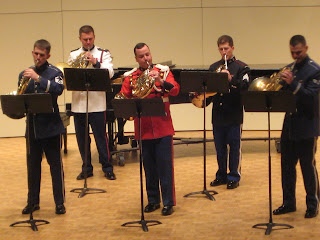 3) Jeff Nelsen’s recital Saturday night. This was a huge highlight for me, because Jeff decided to do a lot of chamber music on his program, and I got to play on several tunes! He is such an awesome player—and such a great showman—all the crowds love him! He played some solo stuff, some duets with Roger, and then I got to join them for a trio. I almost passed on this opportunity, b/c I knew I’d be super busy with hosting duties, and I thought it would be nice to be able to just sit and enjoy the evening concert, but I’m sooooo glad that I decided to do it. I finally realized that if I have the opportunity to play with Jeff Nelsen and Roger Kaza, I should definitely take it! I was thrilled and honored to share the stage with them—it was a blast! 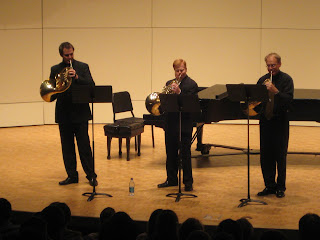 Then Skip Snead joins us for a 4tet arrangement of Bach's Air on the G String. Skip was my teacher in grad school, and is Jeff's cohort in the TAHQ. 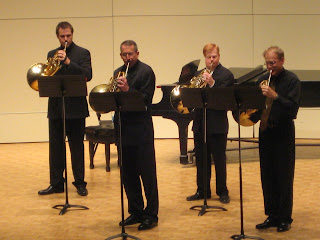 Finally, 2 of my students (Ashleigh and Lizzie) came out, and we ended the program with a great arrangement of Ashokan Farewell for 6 horns. 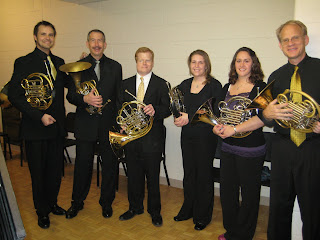 Oh yeah, and in a gag to be talked about in horn gatherings for ages, Roger stepped in and played the accompaniment to Strauss 1 (quite well, I might add)!! 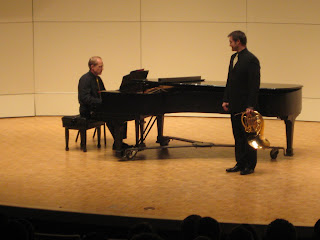 4) "Bohemian Rhapsody" on the final concert! I am really happy that this came together. I know from past experience that these Artists Ensembles can be hard to pull off, mostly because it's hard to get us college professors to commit. But, as my friends will tell you, I'm persistent! So, I was able to assemble more than enough people to play this, including a full rhythm section, and it was a perfect ending to a great weekend! Jeff Nelsen generously agreed to play 1st, and Roger Kaza conducted! I'm playing 15th part, on an F Wagner tuba rented from the Atlanta Symphony! 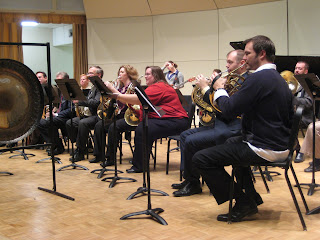 All in all, I had a blast during the workshop! But, I'm glad I won't be hosting again for a while!