*Disclaimer: While I like to think many of my posts appeal to a wider audience, non-horn players will have to excuse me while I geek out on this one!

About 3 weeks ago, I changed my mouthpiece rim.  I'm not one of those players who changes mouthpieces and horns all the time.  In fact, other than a change in my mouthpiece cup a few years ago, this is the only equipment change I've undertaken in the last 9 years.  I usually subscribe to the old adage, "if it ain't broke, don't fix it."  Or, as this cartoon illustrates... 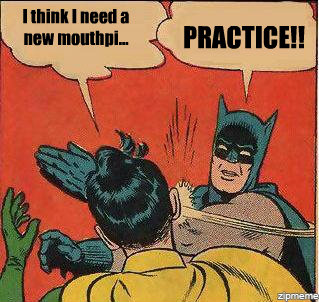 But, this is a change I've been considering for a while, and so I finally took the plunge.
I play on a Paxman-Halstead-Chidell (PHC) mouthpiece, and have for many years now.  I changed from the 'AN' rim to the 'N' rim.  That means I changed from an inner diameter of 17.5 mm to 18.5 mm.  This is a big difference!  I'll get to my reasons and reactions in a second, but first, as I began to write this post about a little gold ring, I couldn't help but think about another very powerful ring, and the quote below... 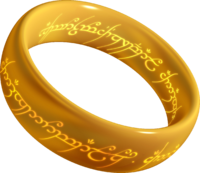 Boromir: [holding the ring after Frodo has lost it] "It is a strange fate that we should suffer so much fear and doubt over so small a thing. Such a little thing."


The main reason that I wanted to switch to a wider diameter rim was to have more room to work inside with my lips.  Specifically, I wanted more room to be able to better negotiate one particular embouchure shift (I hate the term "break") around 4th line D that always... shall we say... demands my attention.
So far, here are the pros and cons:

PRO: Having more room to work inside makes the shifts easier to negotiate
PRO: My sound is more open and warmer in general.  On the smaller rim, I had to be careful to avoid getting a brittle quality to the sound at times.
PRO: I am less effected by subtle changes in my lips from day to day.  With a smaller rim, a little puffiness was much more distracting.
PRO: The low range is easier and sounds better, and playing loud in the low register is easier.

CON: The wider rim means I have to work harder for endurance and high notes.  This has been the greatest adjustment.  To be honest, I'm still adjusting to it, and I still have days where I second-guess myself for changing.  I'll know a lot more about how it's going to work out after some upcoming orchestra and brass quintet playing that will place greater demands on my endurance.
CON: It just feels different!  We get so used to how the mouthpiece feels on our face, that a change in the width of the rim takes a while to adjust to.  Oddly enough, I am now in "no-man's land;" when I try out the old rim again for comparison, it feels really tiny!

Like I said, this was a carefully considered change, and I pretty much knew to expect all the pros and cons listed above before I placed the order.
If you've read this far, you must be a serious horn geek like me, so I'll offer another disclaimer.  I'm not recommending this type of change to anyone else.  Everyone's lips and embouchure are different.  This is the second time in my career that I've taken a step up in the diameter of my mouthpiece rim (the other was in grad school), and I certainly wouldn't recommend such a large inner diameter to a young player, unless they had very large lips.  (In case you're wondering, I consider myself to have medium lips.)
I'll try to post an update after my 2012-2013 performance schedule gets into high gear, and let you know how the adjustment is going.

UPDATE: Read the follow-up here.
Posted by Travis Bennett at 11:13 AM