This is a game I invented to play with my horn students each semester before scales tests and juries. Here are the basic "official" rules, which seem to change slightly each time we play:

Place plastic cups in front of each player with the name of a scale written on each cup. Players may arrange the cups on their side however they choose, as long as they are all touching. 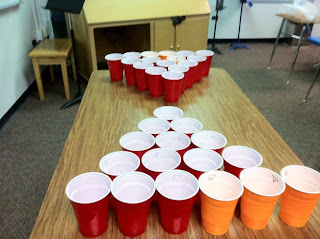 The winner of the coin toss can choose whether to throw or play first.

One player tosses a ping-pong ball into a cup on the other player’s side. When the ball lands in a cup (which often takes several tries), the opposing player must play the scale indicated on the cup. The metronome is on while the scale is played. The other spectators rate the performance by consensus, on a scale from 0 to 10 (10 being the highest), with the studio teacher having the final say.  If the performer scores a 7 or better, that cup is removed from their side.

Play continues (with equal turns) for a set number of rounds, or to a predetermined score.  If the score is tied after the last round, replace all cups and have one round of sudden death.  The player with the highest score wins.

This is a really fun game that (most of) my students really look forward to each semester. The elements of competition and peer pressure are very good motivators! Let me know if you have other favorite games, or ideas to improve Scale Pong!