This week I'm playing in the pit for WCU's production of the Cole Porter musical Kiss Me, Kate.  I always enjoy working in the pit when I get a chance; it's different than what I do most of the time, and it presents new and interesting challenges.  Plus, I get to play great music!  In this case, I get to "get my big-band on," which is a style we horn players don't get to play very often.

If you're not familiar with the show, chances are you've heard several of the songs.  Here's a quick review from the licensing company's site:


Combine Shakespeare's "Taming of the Shrew" with Porter's music and lyrics to get KISS ME, KATE an instant success with every cast and audience. This is a play-within-a-play where each cast member's on-stage life is complicated by what is happening offstage. Musical numbers include Why Can't You Behave, So In Love Am I, Wunderbar, Tom, Dick or Harry, Were Thine That Special Face, Too Darn Hot, Brush Up Your Shakespeare, I Hate Men, Always True to You (In My Fashion) and Another Op'nin, Another Show. KISS ME, KATE is fun, melodious and sophisticated.

You can read more about the show at Wikipedia.  And, there's a YouTube channel where you can watch the whole show, in 22 parts!
The instrumentation calls for only 1 horn.  The rest of the brass section consists of 2 trumpets and a trombone.  As is quite common in these types of shows, several of the woodwind players are "doubling" (playing multiple instruments).  And Cole Porter has treated the horn player as a variety of instruments, too.  At various places in my part, it says "quasi clarinet, quasi cello, quasi trombone," etc.  Indeed, I have to listen carefully and blend with the strings or woodwinds at times, and then other times I get to "let it rip" with the brass.
There aren't any real major horn solos to mention, but there are some really nice moments scattered throughout.  As always with show tunes, you have to watch out for constantly changing key signatures, and play much of the time with several sharps or flats.  Of course, I mark my part if I miss an accidental, and I even sometimes mark one I don't miss, if I think I might miss it next time!  The parts that require the most concentration are the "big band" sections.  These are also the most fun parts to play!  Here's a sample page from the ending to the lively tune, "Tom, Dick, or Harry" (click for a larger image): 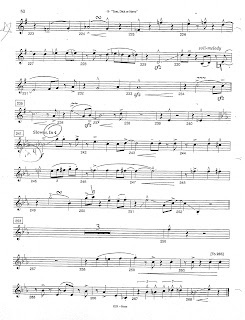 You can see, there are shakes, turns, and rips galore!  One other challenge about this show is its length: my "book" is 144 pages long!
This gig is very different from the last time I played in the pit, which was for the Asheville Lyric Opera's production of Carmen.  For that production, we used a reduced orchestration--I was the only brass player--and we were in a very small pit.  Consequently, I got "the hand" a lot during that run, and had to be VERY delicate with all my playing.  For Kiss Me, Kate, we have a large pit, and a fairly large orchestra, so I get to play at much more comfortable dynamic levels--even quite loud much of the time.
That's one of the things that's so interesting about pit work--every show and theater are different, and you have to figure out how to make it work.  While I was in grad school, I played for Jesus Christ Superstar, and the theater didn't have a pit, so the musicians were in a closed room off to the side of the stage!  Everything was mic'd, and the conductor followed the action with a TV monitor.  It was summertime in Alabama, so we came to the theater in our shorts and sandals, and played the show.  It took extra effort to remember that there was an audience listening out there.
This week, I wish I could see what was happening on stage, but I'm in the back of the pit.  It sounds like the Musical Theater students are doing a fantastic job!
Posted by Travis Bennett at 11:21 AM