A World Premiere: "far beyond the dissonance"

This week I had the opportunity to give the world premiere performance of a piece for solo horn.  The title of the short but challenging work is "far beyond the dissonance," and it was written by Dr. Greg Robin, a colleague of mine at Western Carolina University... 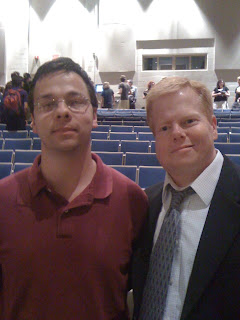 The following program notes were written by the composer:


Greg Robin’s far beyond the dissonance explores timbral variations of the [0,1] dyad. New intervallic constructs are a result of the latent intervals created from multiphonics and registral displacement. The opening gesture of a unison to an [0,1] dyad, by way of a multiphonic, creates the interval-generating motive of the work. Through timbral transformations of vocal glissandi, echo-gliss, muting, and flutter-tongue; a sense of sound transformation is perceived. This piece was written for and dedicated to Travis Bennett.

Of course, it's a rare opportunity to give a world premiere, and preparing a piece that you've never heard before requires a bit different strategy.  When I first got the music and stumbled through it like someone feeling their way through a dark room, it seemed like just a series of techniques or riffs that had to be learned.  Only after I spent a lot of time with it, and could maneuver the extended techniques, complex rhythms, and unfamiliar intervals, could I begin to see the big picture and the piece really began to make sense to me.
The more I lived with the piece, the more interesting it became, and I made new discoveries at every practice session.  I could see motivic connections across larger sections of the piece, and could begin to "tell the story" from beginning to end.  I felt like the music was slowly revealing itself to me, like a sculpture takes shape out of a chunk of rock.  Since there was no recording to refer to, I had to tap into my musical instincts and experience to go beyond what's marked on the page in shaping my interpretation.  The entire process was really quite exciting, and involved a fair amount of experimentation.
Thankfully, Greg is not one of those composers that waits until the last minute to get the music finished!  I got the piece a couple months before the performance, so I had time to experiment and discover.  There were periods during that time that I was busy with other playing, and didn't look at it for a while.  Then when I returned to it, I had a fresh perspective, and could see things I hadn't before.
One of the coolest effects in the piece is its use of multiphonics.  I had only ever used multiphonics to create consonant chords, but the first measure of this piece calls for you to sing and play in unison, and then slowly bend your voice up a half-step and back down.  This creates a really interesting sound, where the dissonance beats gradually faster and then slower again as you return to the unison.

I was gratified that the piece was well-received at the first performance.  Honestly, I was unsure how it would strike people on just one hearing, since I had such a different perspective, having become intimately familiar with the piece.
The experience of preparing and performing this work stretched me as a horn player and a musician, and so I am grateful to Greg for this opportunity!
(Incidentally, it also stretched me as a blogger - that's my first embedded audio clip!)
Posted by Travis Bennett at 3:07 PM