I just recently returned from another successful international tour with the SMBQ.  We visited southern Germany May 9-17, playing concerts at some of WCU's sister schools in Ludwigsburg, Weingarten, and Tübingen.
On the map you can see some of the locations we visited...

View SMBQ Germany Tour 2011 in a larger map
If I were to go into great detail about every place, this post would go on forever.  So, instead, I'll let the pictures do most of the talking.  Every day was just packed with great sights, great food and great people.  My main reflection is this: I've been fortunate to gain a much more global perspective in the past 18 months, taking extended trips to Argentina, China, and Germany.  I've realized there are wonderful people everywhere, leading wonderful lives.  It doesn't matter if it's a big city, or a small village - in Beijing, or Isla Verde, or Weingarten, or Munich, or Cullowhee - it's the people that make the place.  It makes me appreciate the people I live with more.
Below are just some of the highlights.  There are many more pictures and stories that I don't have room to share here.  You can click the photos for a larger image. 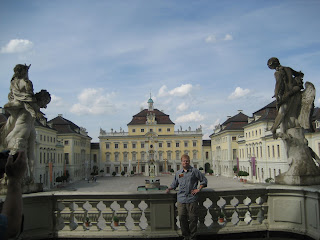 Ludwigsburg Palace
On a side note, across the street from this palace I noticed a hotel/restaurant called "Waldhorn am Schloss."  There was a plaque on the side of the building that said in 1763 Leopold Mozart stayed there with his 7 1/2-year-old son, Wolfgang! 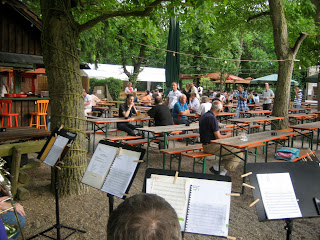 Beer Garden in Ludwigsburg, Uferstüble
We were determined to play some German music in a Beer Garden while in Germany, and we got our chance early in the trip!  The owner had said we could have free beer "if" we played well.  I knew we were in good shape when we hadn't finished our second tune, and the waiter was already delivering 5 half-liter mugs!  They must have really liked us, because there followed more beer (in liter mugs!) AND free food!  The German Band arrangements we had didn't include a horn part, so I had to transpose down a 5th and read a Tenor Sax part - it took a little getting used to!  Here's some video... 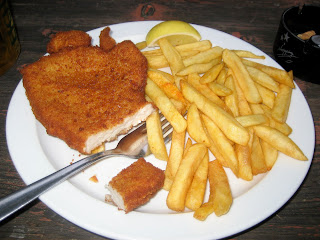 My first Wiener Schnitzel (not the last of the trip)!  Delicious! 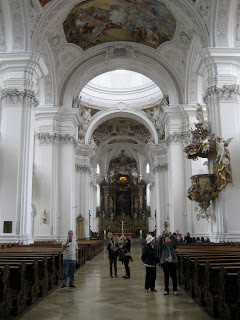 Basilica in Weingarten
It seemed like there were gorgeous churches everywhere we went.  They looked impressive enough from the outside, but when you stepped through the door, it took your breath away.  The paintings, carvings, etc were just awesome! 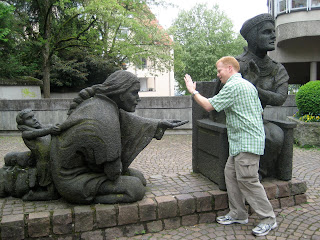 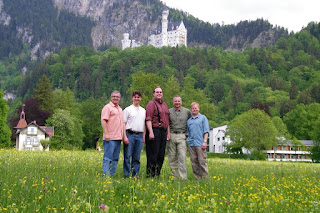 Neuschwanstein castle in the background.
On our way to the castle, we had stopped off at Lindau and stood on the edge of the Bodensee (Lake Constance), where you can see the Swiss Alps across the water. 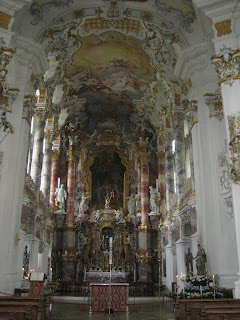 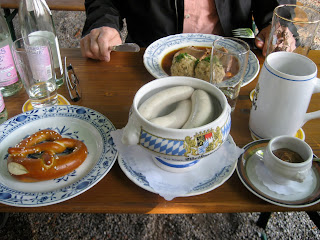 Weisswurst with pretzel and sweet mustard - a Bavarian tradition. 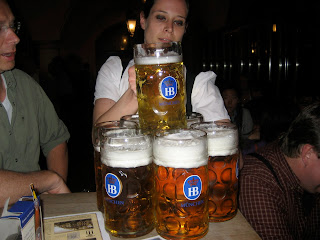 The Hofbraühaus in Munich sells beer by the liter, and the servers handle them by the bunches! 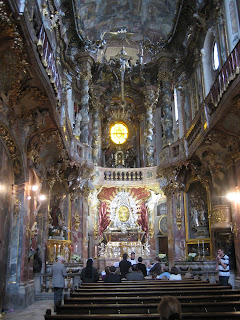 The Asamkirche in Munich
This was probably the most amazing church we visited, as far as the decor - it's just so dense!  I could have spent hours looking at everything; it's really like sensory overload when you walk in! 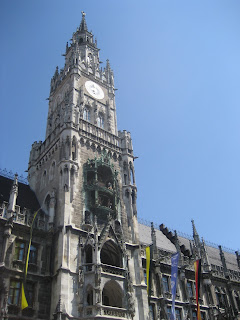 The famous Glockenspiel in Marianplatz, Munich 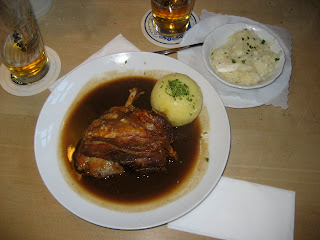 My favorite meal of the trip, and another Bavarian specialty - Schweinshaxe (pig knuckle) with potato dumpling and saurkraut.  Delicious!  This was at the Augustiner Keller for lunch.  VERY crispy skin. 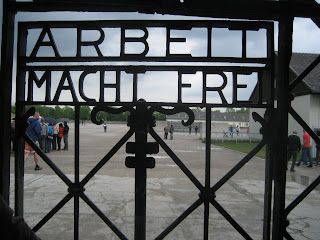 On our way out of Munich Sunday we visited the concentration camp at Dachau. This is a picture of the entry gate - it was a Nazi lie meaning "Work will make you free."  Almost fittingly, it was a rainy, dreary day.  But standing in the rain without an umbrella, listening to our tour guide, I couldn't help but think what a small inconvenience that was, compared to what the prisoners suffered in that same space.  I believe that mankind is predisposed to evil, but I still kept asking myself "how could this happen?" 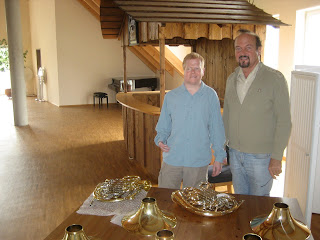 The next day was a much lighter adventure.  Mike Schallock (tuba) and I made the 2 hour drive from Tübingen to Mindelzell, to visit Engelbert Schmid's shop.  This was a real highlight of the trip for me.  He was very generous with his time, and even treated us to lunch where we had some wine from his own vineyard in Spain!  While they serviced my horn, I was able to try out a triple horn and a variety of bell flares in the concert space upstairs.  After lunch, my horn was ready, and I was able to experiment with different bells on my own instrument.  The work they did was great - my valves haven't moved so well in years! 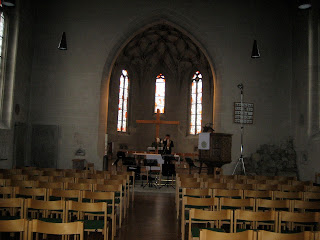 This was the site of our final concert in Tübingen: Jacobuskirche, originally from the 12th Century, rebuilt in the Gothic style in 1500.  I haven't said much about the concerts, have I?  They all went very well, and the audiences were fantastically warm, enthusiastic, and appreciative.
Germany is a beautiful country that I'd really like to visit again in the future.  Every little village seems to be brimming with character.
Posted by Travis Bennett at 3:23 PM