I’ve been involved with a project for the past three years that has finally come to fruition!  My colleague at WCU, pianist Andrew Adams, and I have created a critically revised performing edition of Camille Saint-Saëns’ Morceau de Concert, Op. 94.  This has recently been published by Faust Music. 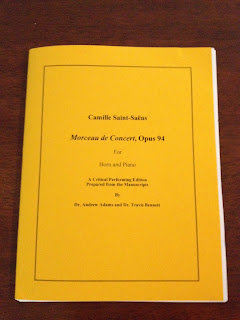 Included with the music is a 5-page foreword that explains the rationale behind creating a new edition of such a standard work, and also highlights some of the changes between our edition and previous editions.
From the foreword:

"This critical performing edition of the Morceau de Concert, op. 94, by Camille Saint-Saëns (1835-1921) is the first to be based on the composer’s manuscripts housed in the Bibliothèque Nationale de France in Paris. It addresses literally hundreds of discrepancies found not only in the manuscripts themselves, but also in the scores most widely used today: the Durand edition of 1893 and the International edition of 1956."

Saint-Saëns first wrote a version of the piece for horn and piano in October 1887, and then completed the version for horn and orchestra one month later.  When you look at the two manuscripts, it appears that the piano version was more of a rough sketch, and the orchestral version is a more thoroughly thought-out work.  Most of the current editions are based solely on the piano version.  Our edition could be called a piano reduction of Saint-Saëns’ orchestral version, but it really is more than that.  We looked carefully at both manuscript versions, and tried to faithfully represent the composer’s intentions.
This post is in danger of going on way too long, so I’ll just try to whet your appetite so that you’ll buy the music!  There are many small but important changes in the horn part, including a few note changes, articulation changes, and some very interesting dynamic changes compared to the previous published editions.  The piano accompaniment has been thoroughly revised to make it truer to the orchestral score and more pianistic.  I must give much credit to my collaborator, Andrew Adams, because it was his feeling that the existing piano part seemed a little clunky that led us to start looking into this piece in the first place.
One other note about this edition, from the foreword:

“It is important to note that the markings in this edition do not merely reflect an interpretation of the piece. While performers may take interpretive liberties with such elements as slurs, articulations, and dynamics, this edition hopefully presents compelling ideas based on the original sources that will shed new light on this beloved piece in our repertoire.”